The RRMT is a library of parsimonious conceptual lumped rainfall-runoff models within a flexible framework. The modeller has the potential to choose and test various model structures with a low or medium level of complexity (in terms of number of parameters). The simple conceptual model structures included in the toolkit have a high level of parameter identifiability as described by Wagener et al. (2004), and generally consist of a soil moisture accounting module and a routing module. Soil moisture accounting modules are used to transform rainfall into effective rainfall which is further passed to a routing module to represent flow processes through various pathways such as overland flow, and groundwater flow. The modeller has the option to implement different model structures by pairing different soil moisture and routing modules, while having the ability to add new modules. RRMT considers spatially uniform inputs and parameters (lumped modelling), providing estimation of streamflow at the catchment outlet. 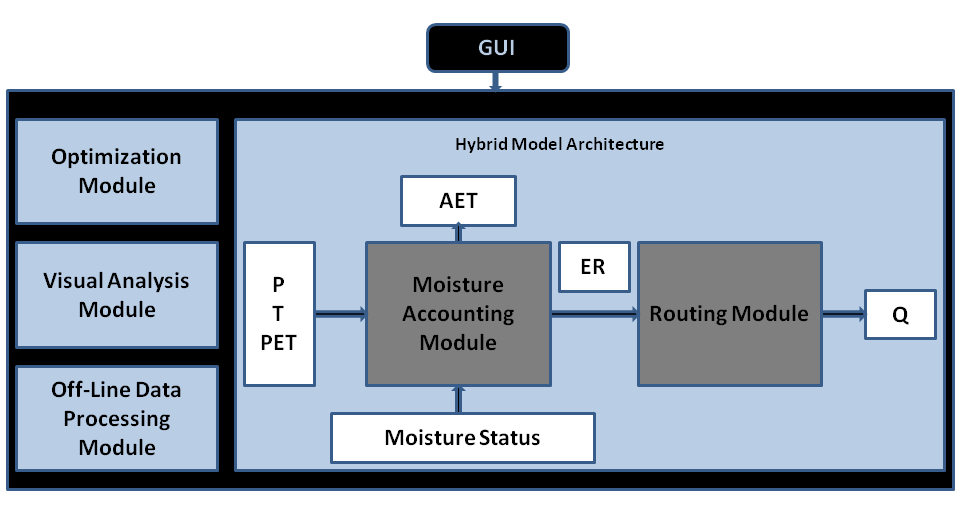 The RRMT-SD has been developed to estimate streamflow at points along the river system allowing efficient building and evaluation of spatially semi-distributed models. RRMT-SD conceptualizes the catchment as a network of spatial subunits on which conceptual or hybrid metric-conceptual rainfall-runoff models are computed. The hydrological processes and climatological forcing data within the subunits are considered homogeneous. Then the degree of spatial distribution is represented mainly through the number of subunits, which can represent subcatchments or hydrological response units. Each subunit is considered as lumped, with the hydrological processes and climatologically forcing data homogeneous within each one of them.

A rainfall-runoff model consisting of a soil moisture accounting, runoff routing and channel routing module is built-up for each subunit. A variety of pre-built modules are available, based on the lumped RRMT, but also others can be added, providing additional flexibility. Topographically, RRMT-SD simulates runoff for the uppermost stream subunits first and accumulates the flow down the channel network (Orellana et al., 2008).